Posted on February 27, 2018 by Adrift Couple Leave a comment

Binsar – Inside the Sanctuary

Bleary eyed, one morning, I read a news item about how the glaciers up in the Himalayas were receding and reducing in size. That due to global temperature changes it was snowing less in the upper reaches.

I wondered if the trek to Pindari Glacier, (situated between the snowcapped Nanda Devi and Nandakot Himalayan peaks) I had undertaken many years ago as a young man just a few years out of college, had increased by a km or so! How much would that really matter in the 94 km round trek through forests, meadows, makeshift wooden bridges over gushing rivers, verdant valleys, narrow trails cut out on cliffsides, treacherous snow bridges, freezing temperatures, icy winds and sudden rains? That km right before the Pindari Glacier (from where the Pindar River originates ultimately to merge with the holy Ganges) let me tell you would be the toughest. It is the last mile which kills you. But the feeling of triumph is phenomenal. As also the pristine feeling of tranquility and spirituality which envelops you.

Well coming down to less ambitious thoughts, the flip side of the weather this winter was that the offbeat hills of Kumaon like Mukteshwar and Binsar in Uttarakhand (India) would not be snowbound. This gave me an opportunity (trust us to be grab opportunists in the new economy, damned be all else) to drive up there.

From Binsar, you get a spectacular 300 km view of the Himalayan Ranges.

November to February is the best time. November is the month, after the monsoons when the clouds are not flirting down in the valleys and it has started snowing in the upper reaches. March at the other end of this season would be a month when the fresh snow would not be coming down and the ranges would be losing the white cover due to the sun beating down on them. The rhododendron trees are blooming and the forest is aflame with the red flowers. Berries can be seen on the bushes which bring the Himalayan birds here – the red billed blue magpie with its long tail, my perennial favorite. April – June, before the monsoons set in, is a popular period with holiday travellers. In the summers, when the lower hills get warm, Binsar at 8000 feet with its verdant forest cover, deep emerald valleys and looming mountains over the horizon make for an unforgettable and cool vacation.

8-9 hours from Delhi, by road, 90 kms from Nainital and ½ an hours drive ahead of Almora town, Binsar is still extremely virgin and untouched. Apparently the name Binsar was given to the place after the presiding deity, Lord Vineshwara (Lord Shiva). As the legend goes, Binsar is said to have been a hill resort since the time of the Katyoori kings, who reigned the area of Kumaon up to 700 A.D. and thereafter the Chand kings who ruled Kumaon up to 1790 A.D.

At an elevation of almost 8000 feet, Binsar, surrounded by alpine flora, offers an excellent view of the greater Himalayas. The 300 km spectacle, for which my 28 mm wide angle lens was woefully inadequate, of the Himalayan Ranges are dominated by the massifs of  Nanda Devi, Nandakot, Pachachuli, Chaukhamba amongst many others. The forests of Himalayan oak and rhododendron are excellent for trekking as also the pine forests on the lower slopes.

The place to stay is within The Binsar Wildlife Sanctuary and not the lower or peripheral areas. The denudation of the Binsar Forest was halted by the notification of Binsar as a sanctuary in 1988 under the Wildlife Protection Act. Mukti Datta was instrumental in this declaration as well as the setting up of the Panchachuli Women’s Weavers Association. Panchachuli Women Weavers is a development programme, which facilitates economic and social independence for women in the Indian Himalayas using the traditional arts of weaving and knitting. 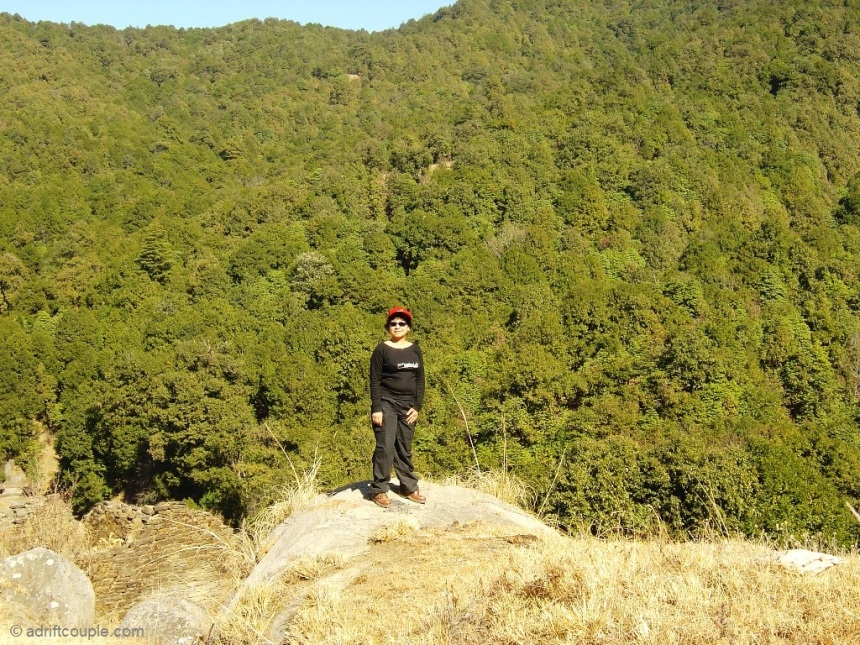 The Binsar Wildlife Sanctuary encompasses an area of about 50 square kms. The locals insist that the trails leading through the dense forests are filled with over 200 species of resident and migratory birds and wildlife such as leopard, barking deer, ghoral, wild boar, fox, porcupines and langurs. At times wildlife is said to be spotted though we did not come across any except some black langurs – we moved on giving each other due respect.

A small chapel, from the British era, within the property where we were staying.

Ranjana and I were staying at  a heritage property which had been refurbished into a hotel. 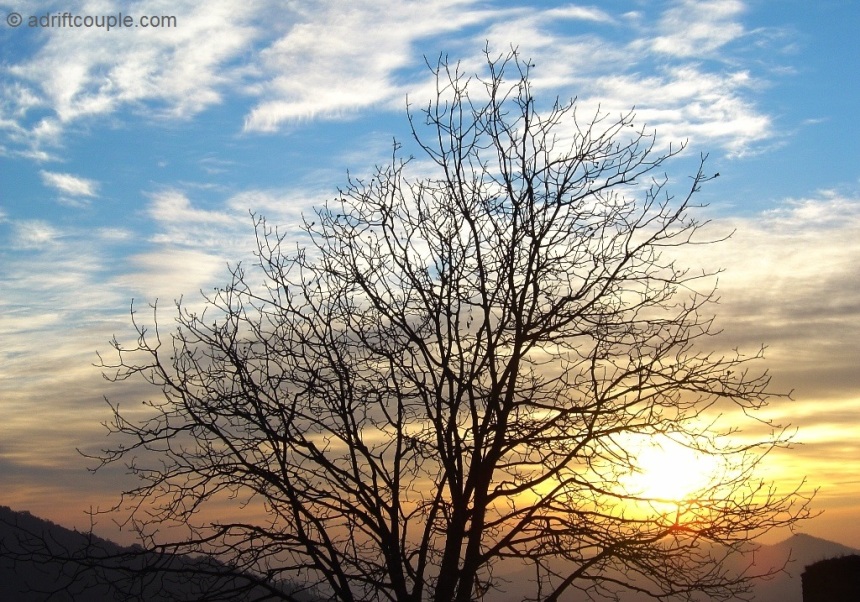 We got up early and saw one of the most amazing sunrises; the sky – an artist’s palette – changing colours from grey to orange to azure. I got some great shots of the sky and one particularly of the sunrays glinting through a stark walnut tree with a crumbling cottage in ruins in the foreground as the myriad hues spread across the sky, swirls of mist still down in the valley. To the north, the Himalayan ranges started shrouding off their cover, to emerge romantically golden, never losing their magic to one’s eyes however many a time may one have seen the spectacle unfolding in the pristine environs. Aah, the magnificence of the Himalayas and creation’s unparalleled beauty propels you towards soothing tranquility. We did not need to close our eyes, think of happy events, focus on our third eye, inhale and exhale deeply, remember our spiritual guru’s dictates to do a mandatory 30 minute meditation routine to reduce stress, anger and aggression.

It was all happening naturally, as The Creator had meant it to be. Eyes wide open unable to take in all that was on offer. Pure mountain air coursing through our body smoothly. Time at a standstill. Our being getting transformed into an ego-less self effortlessly. Humility transcending through us naturally as we stood – non entities in front of the majestic mountains, all encompassing forest and undulating valleys. 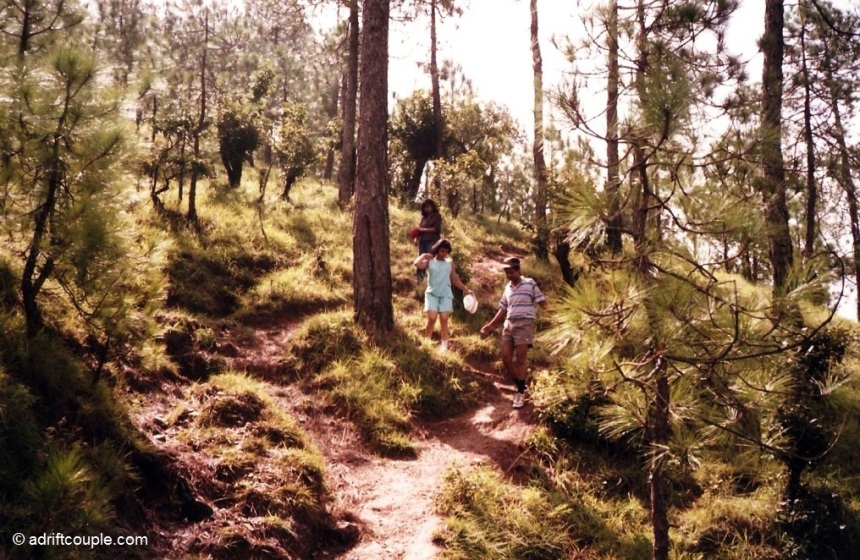 A throwback picture of our first visit to Binsar in 1992!

As we hiked through the forest upto the Jhandi Dhar hilltop for even better Himalayan views, the dappled sunlight on the leaves strewn jungle path almost turned me into a poet, the sheer magic of colours seemingly inspired me to want to do a Van Gogh, the serenity as if was propelling me to delve deeper into the ancient philosophies. If a mediocre being like me was getting so effected, no wonder these hills at one time were such huge inspirations to evolved personalities like Tagore, Bapu and Vijaylakshmi Pandit.

The three days we were at Binsar were filled with myriad experiences, overwhelming feelings, resurging realisation of the simplicity of village life and the naivety of rural folk, a rediscovery of the mesmerizing splendour of nature.

Back in Delhi, the magic has still not worn off.

Note: Our first visit to Binsar was in 1992 and the next one was in 2007. Let us know if things have changed since then!