Posted on March 1, 2018 by Adrift Couple Leave a comment

Our First Wine Tour – More Than Just Gossip Grows On The Grapevine!

After watching the movie, A Walk In The Clouds, the desire to visit a vineyard resurged. Then we chanced upon someone’s personal video in which he was strolling through a vinery in Stellenbosch as the sun was setting. So alluring! We said to ourselves, “Why not Stellenbosch?” Since Stellenbosch is a university town we contemplated whether it would provide the quietude we were looking forward to.  So instead we settled for the neighboring sleepy village of Franschhoek in South Africa’s Western Cape Province surrounded by the vineyards of the Cape Winelands.

Franschhoek lying in the shadow of dark enigmatic mountains has a storybook setting with a stunning landscape as viewed from Franschhoek Pass, the European charm still intact with its beautiful valley of centuries old French vineyards and Dutch Homesteads. It is considered to be the food and wine capital of South Africa. 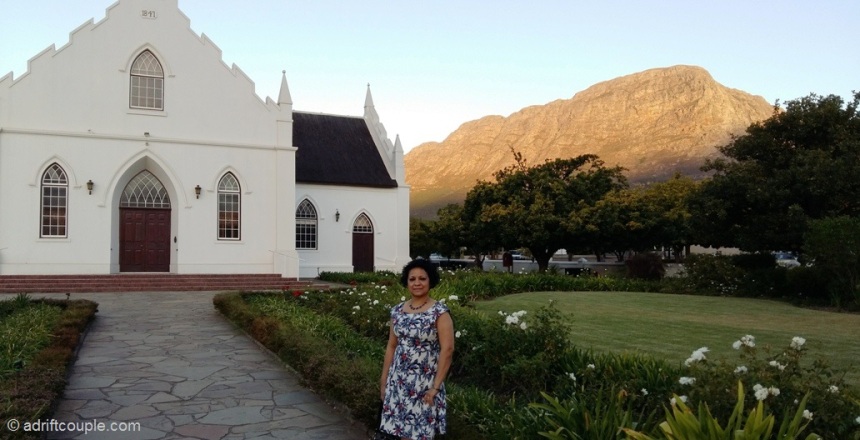 The Dutch Reformed Church dates back to 1847 and was fully restored in 1968. It is situated on the main street of Franschhoek on a large estate.

Franschhoek has had a chequered history. Originally the bushmen, then the KhoiKhoi herders followed by Dutch settlers and later populated by the Huguenots (French Protestants) in the 17th century. Today, many farms in these areas still retain their French names. Huguenots were particularly experienced in viticulture. Franschhoek which means French Corner was so named in the 19th century. Interestingly it was earlier known as Oliphantshoek – elephant corner. Elephants found its isolation ideal for raising their calves! 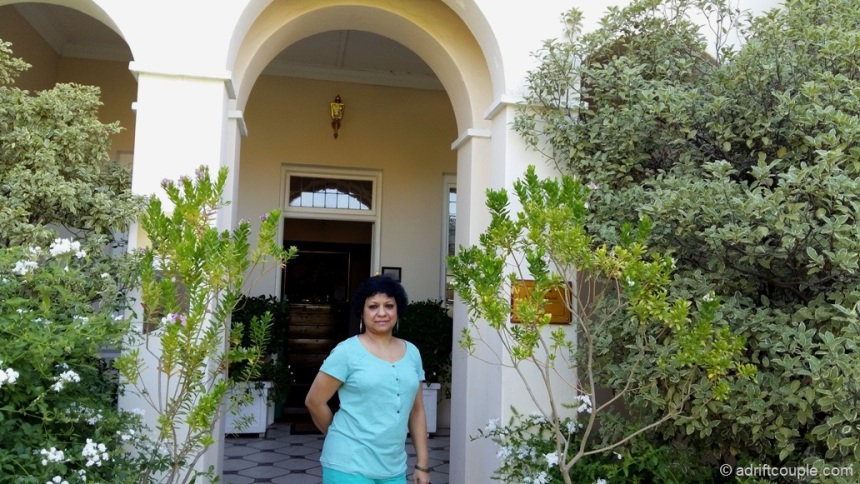 Since we wanted to experience the culture and ambience of the village we chose to stay in a guesthouse in the middle of the town. It was an enchanting B&B and we had an intimate cottage with a bedroom, living room and patio next to a small swimming pool. 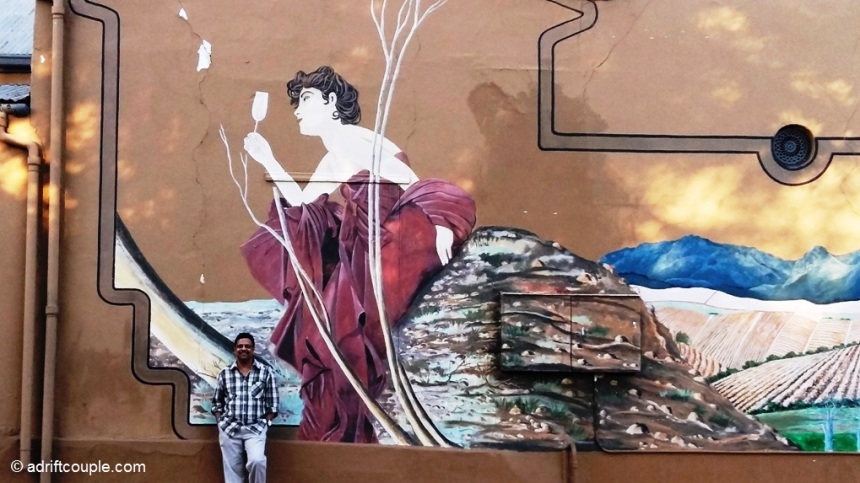 We enjoyed strolling along the main street stopping for coffee at roadside cafés and dinner at the pubs. The evenings would get windy and our walk back would be on a deserted road,  the village having gone to sleep at nine and only the lone night watchman providing some much needed comfort to keep wandering carefreely while enjoying the romantic moon-rise! 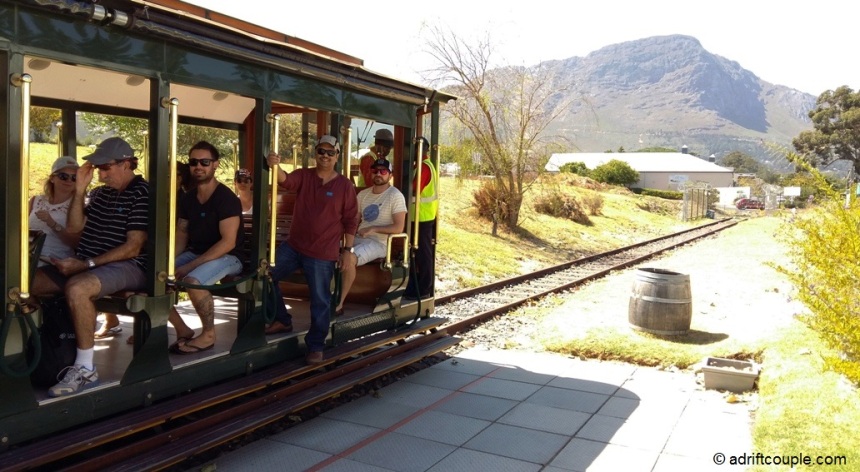 However, the highlight of our stay indisputably was the The Franschhoek Wine Tram hop-on hop-off tour.  This is the most convenient and exciting option of experiencing the authentic flavor of the picturesque valley with its romantic wine estates, spectacular country panorama, delectable cuisine and excellent wines.

In 1904, a 28 km branch line was built between Paarl and Franschhoek to serve as an alternative to ox drawn carts for farmers wanting to get their produce to the market. Steam locomotives operated along the route until diesel locomotives took over in the 1970s and then, in the 1990s, as the need for rail transport decreased, service along the railway line was discontinued. The branch line was reinstated in 2012 by a private operator and now sees service as the Franschhoek Wine Tram, a tourism project utilizing newly constructed trams modeled after the Blackpool Corporation Tramways Double Deck Balcony Tramcar of circa 1923 to transport tourists between wine estates in the area.(Source: Wikipedia).

Each of the five estates we visited on the Blue Line unfolded a delightful experience for us. 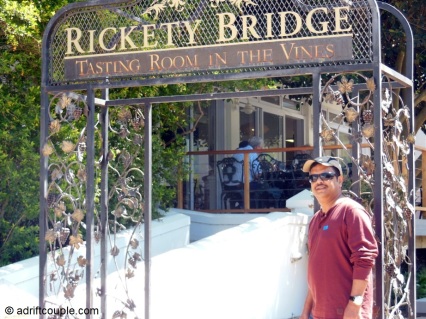 We commenced with ‘Rickety Bridge’ where we acquired the nuances of wine tasting and undertook a fascinating cellar tour where we saw the wine making process – grapes being crushed, pressed, fermented and aged in huge oak casks. 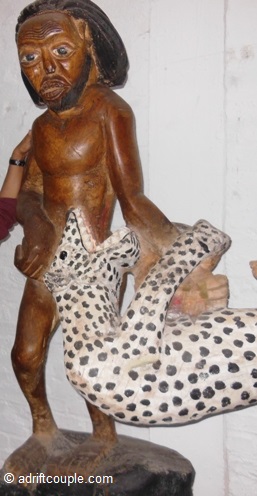 At Grande Provence we were overwhelmed wandering through The Sculpture Garden and The Gallery which is considered to be one of the most highly regarded galleries in the Cape, with a reputation for showcasing some of South Africa’s finest established and emerging artists. Some of the exhibits were really fascinating! 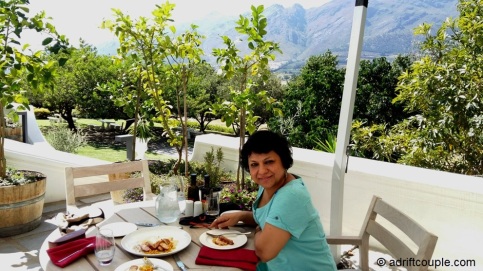 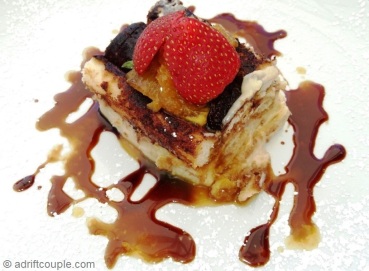 Mont Rochelle – classy and elegant – was our host for lunch. The Estate is part of the farm established in 1715 by Jaques de Villiers, one of the original Huguenots. Today, Mont Rochelle is owned by Sir Richard Branson and part of the Virgin Limited Edition collection. We had an unforgettably delicious lunch at their Country Kitchen. A delightful afternoon taking in the sun on their restaurant terrace overlooking the mountains. Since we were feeling rather hungry, we decided against being too adventurous with the food. We settled for Barbeque Spiced Chicken (with tangy corn and pineapple relish, Pina Colada sauce) and Tiramisu with coffee sauce and caramelised oranges. Excellent choice of dishes! 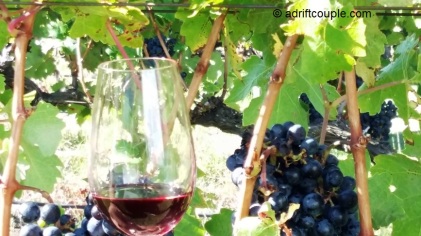 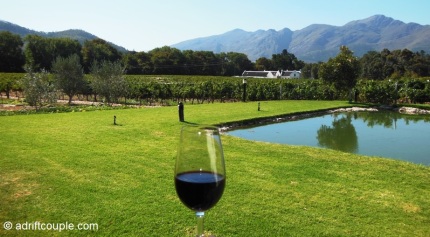 Half a day through the Wine Tour – were we already oenophiles, gourmets and aesthetes? Not sure of that but satiated certainly! We suddenly realized we had not done the typical wine and grape pictures. Our next stop at Holden Manz gave us the perfect photo opportunities with its unending vineyards, the manicured lawn, lake and the mountains beyond. 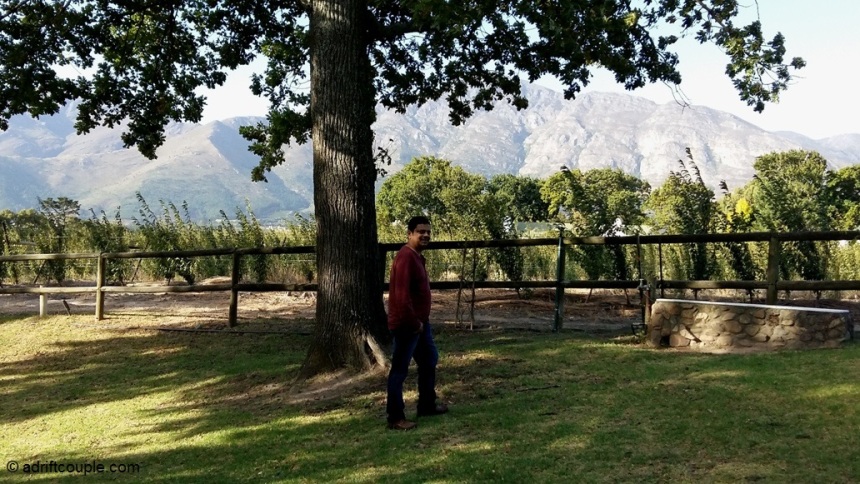 Our last visit was to La Bourgogne which was our most relaxed wine tasting encounter with the vineyards on one side and a green meadow in front shaded by century old oak trees. This is a division of the first Huguenot farms. Here, we also paired the wines with olives.

A very interesting day indeed! We discovered that we sort of know our wines. A visit to five wine estates, tasting an average of three wines at each place. Do the maths!

The next morning we drove across Franschhoek Pass and through the picturesque countryside, apple orchards, along the coast stopping for lunch at Hermanus, famous for whale watching. After spending the night at Gordon’s Bay by the sea, we left for Cape Town visiting along the way Cape of Good Hope and Robben Island later – but these and many other are stories for another day.

Franschhoek in South Africa’s Western Cape Province surrounded by the vineyards, lying in the shadow of dark enigmatic mountains has a storybook setting with a stunning landscape. It is considered to be the food and wine capital of South Africa. The Franschhoek Valley lies about an hour’s drive (around 80 kms) from Cape Town. The highlight of our stay indisputably was the The Franschhoek Wine Tram hop-on hop-off tour. The other well known wine producing areas within the Cape are those of Stellenbosch and Paarl.