Indelible Affair at a Coffee Plantation in Coorg!

Tea or Coffee?
That is a no brainer for us now.

It is more romantic for a nature lover to be staying at a coffee plantation. Anyday! Certainly if it is like the Old Kent Estate in Coorg (Karnataka, India). 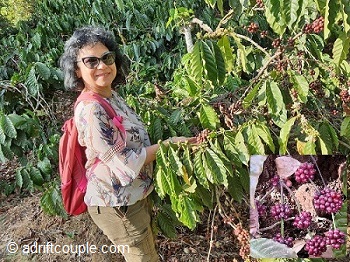 Red coffee berries on the shrubs.

A ruminative evening walk, through the Old Kent coffee plantation, transforms into an indelible affair for us.

Cardamom plant. (Flower and pod in the inset!)

Here during the 1800s Col Wright, perhaps on horseback, surveyed his produce – red coffee beans, white flowers with the fragrance of jasmine, cocoa, cardamom and orange trees which gave an added fragrance to the strong shade grown Arabica (the premium type) and Robusta beans. 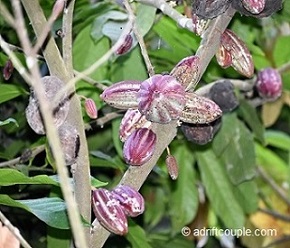 Cacao Beans Plant or Cocoa, the basis of chocolate.

The tree lined paths, largely shady, are so inviting that a feeling of being pleasantly lost in another world befalls, wistful that this is not our real one.

Our shadows get longer in the late afternoon sun, rays filtering through the trees down on the path.

Ranjana ahead, often a lone, diminutive figure on one of the many trails of the vast 200 acre estate as I dawdle, reflective, on the ephemerality of this now.

It was one of those March days when the sun shines hot and the wind blows cold; when it is summer in the light and winter in the shade. – Great Expectations, Charles Dickens.

After another half an hour in this Neverland, as we take a turn, nature metamorphoses into commerce.

There is a multitude of daily wagers sorting and getting weighed the coffee cherries they have picked during the day. 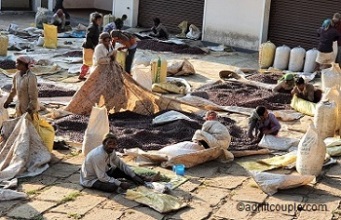 The timing of our visit at Old Kent (earlier known as Horoor Estate) is propitious – the end of the harvesting season.

We are fortunate to see the first blossom showers from the earlier harvested coffee shrubs, the last of the red coffee beans still on the plants waiting to be gathered and because of the ongoing harvest an opportune time for us to be able to see the pulper in action and the sorting, grading, removal of the beans from the pods and then the drying out in the sun.

The coffee plant grows fruit after three to five years of planting and provides optimum yield for about 50 to 60 years. However, some can live and bear fruit for upto 150 years. In some areas of  this estate, coffee trees which are close to 100 years old can be found! 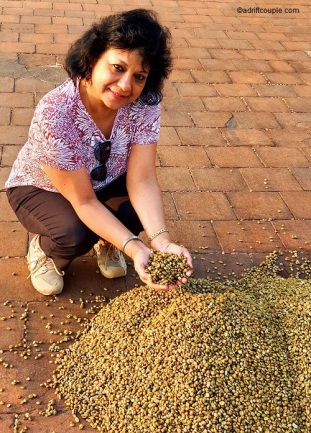 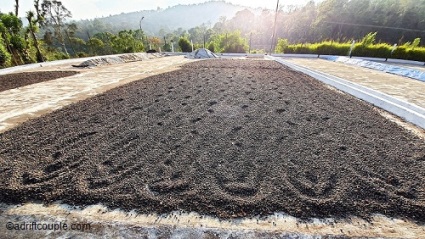 Coffee beans coming out of the Pulper and then left for drying in the sun.

We take the circular ‘Blue Trail’ behind the pulper which is a longer way back to the Lodge and are pleasantly surprised to come down to a large pond ringed by rain forest on one side, the vegetation a shimmering emerald reflection in the clear waters. 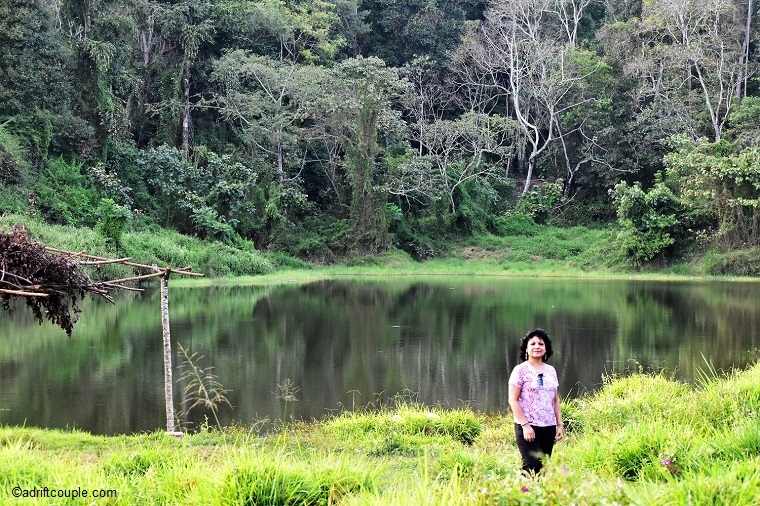 It is late in the season for the migratory birds to be still around so all we see are a flock of endemic egrets on a tree.

As Ranjana turns, done with her posing, she suddenly freezes in her steps and a bated scream escapes her lips as she sees what she thinks is a snake on the ground! It almost is but in reality just a snakeskin from a reptile having undergone ecdysis or molting. The derma sheath lying just outside a burrow by the shore indicating that the snake might have gone for a swim to allow water to loosen the old skin before it created a rip in its mouth area prior to shedding it off. Erring on the side of caution we hurry off rather than take pictures.

For some moments the ethereal feeling from a few minutes back turns into an eerie milieu as we realize the haunting loneliness of  being all by ourselves, more so when crossing the derelict house at the edge of the forest.

Soon we feel comforted by the loud cackling and laughing sound of the Malabar Grey Hornbill. As twilight hits, we emerge from the jungle and onto the metaled road with the plantation on both sides.

The sprinklers for watering the coffee bushes have started and between sauntering back lazily, at times, we sprint to avoid showers wetting us as a sprinkler changes direction. We notice that the plantation has an electrified fence, we are later told, to keep wild animals at bay specially marauding elephants. The trees lining the edge are a much taller varietal called Liberica, known as ‘fence coffee’ although it isn’t cultivated on a commercial scale.

We hasten on as we abruptly realize that darkness is falling fast and we are still a couple of kms away from the Lodge; but again idle, as we came across an explosion of silvery luminous robusta blooms. However, it is a full moon night, the darkness cut by a pale ribbon of moonlight on the now rocky trail, silhouetted rosewood trees with pepper creepers clinging endearingly lend a charm to the evening while coffee plants with their red cherries and snowy blossoms form the understory. 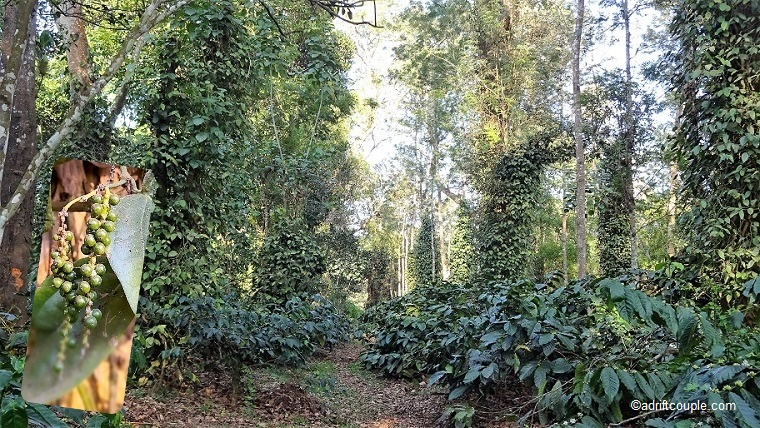 This picture is of a Black Pepper Creeper which grows upto 4 metres in height on supporting trees.

Pepper, which originated in Kerala, was known as ‘black gold’ for its use as a preservative and in medicine since ancient times and was exported to as far as Thebes in Egypt in the 13th Century BC as indicated by the discovery of the peppercorn in the mummified body of a Pharaoh.

Distressingly, a 2017 report in ‘The Hindu’ wrote – India is likely to become a net importer of pepper,  the spice that lured Vasco Da Gama to the Malabar Coast, if the present neglect of the crop is allowed to continue, according to farmers/traders.

Shortly we reach The Lodge, the original residence of Col Wright with his living room, study and bedrooms, all converted into public areas now. This was built in 1864 and is perched at a vantage point within the estate with magnificent views. It is said that the estate was originally a jungle in which big game abounded before Col Wright transformed it into a flourishing plantation. The mounted antlered deer heads in the verandah are evidence to this part of history.
Here, we enjoy a cup of strong and hot coffee savoring its taste and aroma, completing our Crop-to-Cup experience of coffee.

After an early dinner we retire to our cottage, a home in itself. There are just eight  cottages for guests making Old Kent the perfect place for a sequestered and tranquil sojourn. However the property is now coming up with a 20 room complex behind The Lodge.

Birdsongs in the morning break my slumber, tempt me outside to mingle with nature, to rejoice in the pleasures of daybreak. I walk around enjoying the first blush of light and try to capture the loud but only fleetingly visible birds, mostly hidden in the verdant foliage. 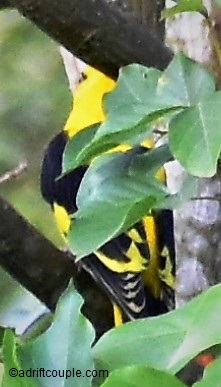 Our cottage, Cannock Chase (named after a district in England known for its spectacular natural beauty) is a large suite enhanced by a four poster and a comfortable living area with floor to ceiling windows allowing in an abundance of natural light, looking out to the plantation and hills beyond.

Ranjana loves the huge bathroom with its period bathtub and foot spa.

For me the favorite place is the small verandah and the adjoining private garden with full-blown flowers lending freshness to the air. 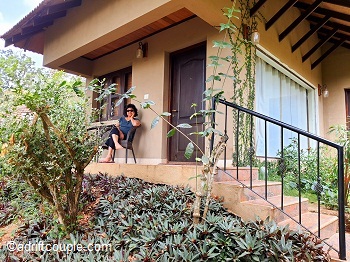 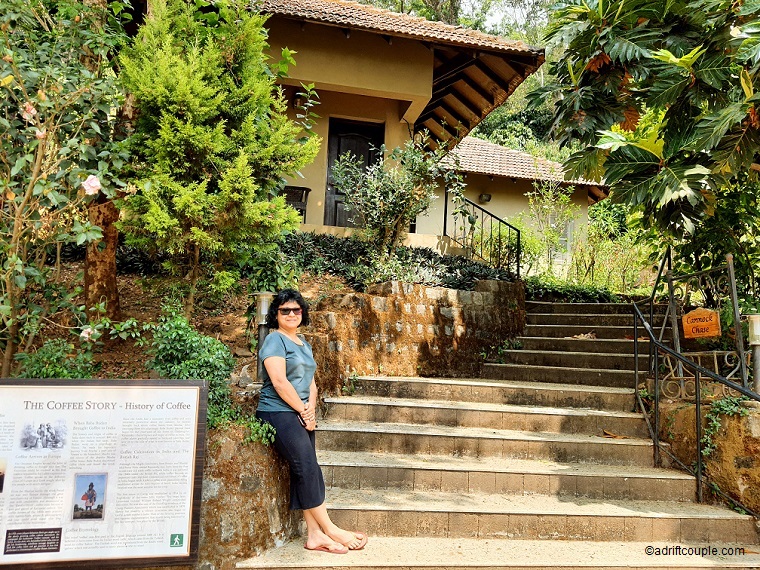 As I read The Coffee Story (on the board at the foot of my cottage) I drift down the annals of time from 1600 AD when Baba Budan (an Indian Sufi Saint) secretly brought back to India seven coffee beans from Mocha (Yemen) and planted them in the courtyard of his home in Chikmagalur, Karnataka – the birthplace and origin of coffee in India to the 1800s when Col W.R.Wright an officer in British India and also a poet and writer, created this plantation in Coorg, 10 years after the first one was established here in 1854 by John Fowler, an Englishman. 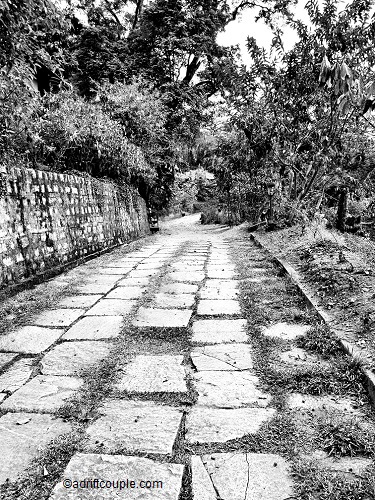 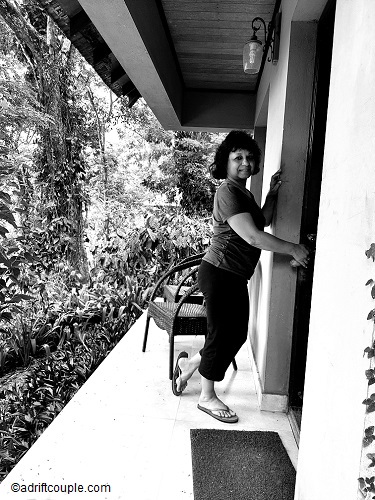 Drifting down the annals of time at Old Kent Estate, Coorg!