My love for wildlife viewing stemmed in the 1970s when as a school going kid I visited the Betla National Park in Palamu, one of the first Tiger Reserves established under Project Tiger, the tiger conservation programme launched in April 1973 by the Government of India. A sight still etched vividly in memory is of a seemingly infinite herd of chital (spotted deer) ethereally visible through the early morning sunlight as the silvery mist dissipated.

Down the years I visited other Tiger Reserves in India – Corbett, Ranthambhore, Sariska, Rajaji, Dudhwa, Periyar but never encountered the Royal Bengal Tiger. My impressions of the imperial beast were acquired only from William Blake’s The Tyger, Maneaters of Kumaon, Life of Pi and Nat Geo Wild!
Though almost every time the co-travelers from the accompanying jeep or atop the other elephant would have exciting stories to tell of hair-raising sightings during the same trip!

The Kabini River separates the Nagarhole and Bandipur Tiger Reserves. Safaris are conducted at 6 AM and 3 PM for a duration of 3 hours each. Nagarhole is the 36th reserve established under Project Tiger.

Earlier this month a similar story repeated during my two jeep safaris at Nagarhole National Park.

The first evening over dinner, amongst sightings of the big cats by others, the family staying in the cottage next to ours gleefully shared a video of a tigress with her cubs from their afternoon excursion. 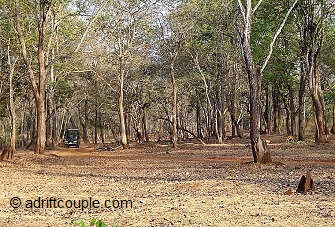 Nagarhole National Park in Karnataka is spread over 643.35 sq kms with a deciduous forest cover of rosewood, teak, sandalwood and silver oak trees amongst others interspersed with small water holes and bordered by the Kabini reservoir.

I meanwhile during both my safaris made sure that I didn’t miss out on the other fauna.

Our anticipated rendezvous with the big cat seemed to have come to an end as our jeep driver Amjad stopped by some hutments and vanished without a word, I assumed for a loo break which turned out to be rather longish.
Seemingly refreshed and with a new zest he said – Let us make a final try in another area.

We came across a pack of dholes (wild dogs)  and a Gaur (Indian Bison) with her calf whose sighting Amjad extolled as rare and insisted we photograph them as if it was a lifetime opportunity. We complied! 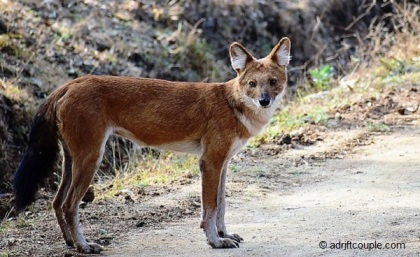 The Dhole (Cuon Alpinus) are wild dogs listed as endangered by the IUCN on their red list the estimated population of mature individuals being below 2500 and decreasing. It is a diurnal pack hunter competing with tigers and leopards for prey. The handsome wolf like creatures in their reddish brown coats jumped over the ditch, gave us a brief penetrating look, crossed the track and vanished into the forest. 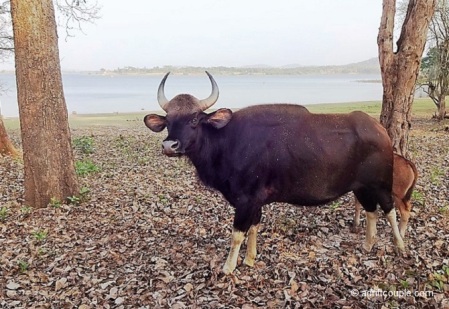 Gaur (Indian Bison) with its calf. The Bos Gaurus is the largest existing bovine and is also distinguished by its ‘white socks’ and inward curving horns. It is listed as vulnerable by the IUCN on their red list. Relaxing in the shade by the river with mynahs flitting across their backs the duo gave us a bored look as we drove away.

Then on an innocuous jungle trail, Ranjana suddenly whispered with bated breath – Ttiiggerrr, look!!
I turned my sight from the forest to the right to the jeep track in front and there it was majestically striding head on towards us.

Our hearts  missed a beat, mesmerized and frozen by its beauty and splendor, its sinews stretching powerfully with each approaching step. Unperturbed by the oncoming huge carnivore, only bewitched by its regal beauty, I frenziedly shot pictures and a video as Ranjana sat hypnotized watching the sleek and magnificent tigress through her powerful binoculars, wanting those seven glorious minutes to be etched in her memory for eternity.

The Bengal Tiger (Panthera Tigris) due to conservation efforts is now at a population of 2967 in India according to the 2018 census. Out of these supposedly 110 prowl the forests in Nagarhole.

Just short of our jeep the muscular predator disdainfully turned left into the jungle perhaps in search of a waterhole.

Her splendid, tawny striped coat reflected beautifully in the sun’s light as she passed close by gifting us with a lazy yawn and a close look at her whiskers and fierce teeth.

She passed by a grazing male gaur, ignoring him vanished into the thicket.

The tiger will see you a hundred times before you see him once!
– John Valiant.

Tyger Tyger, burning bright,
In the forests of the night;
What immortal hand or eye,
Could frame thy fearful symmetry?
– Willaim Blake 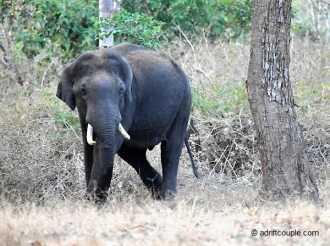 Nagarahole National Park has a large population of Indian Elephants (Elephas Maximus Indicus), fifty percent of the Indian population being in the South.
Without warning a wild male tusker emerges from the jungle and demonstrates its displeasure towards us trumpeting with a raised trunk, albeit a great photo op which I was lucky to capture. We rushed away before it got further agitated. 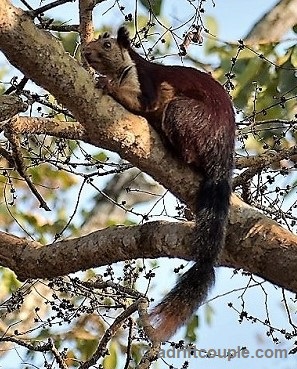 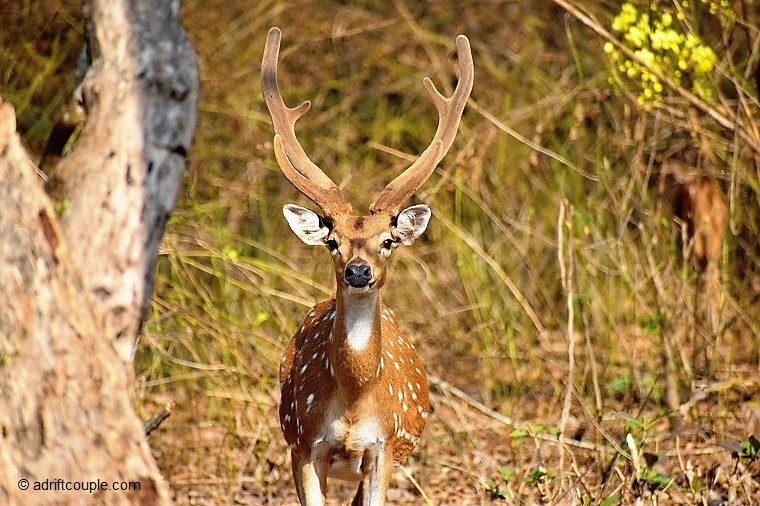 A young male chital (spotted deer) supporting velvety antlers with still some time before he can woo the females! 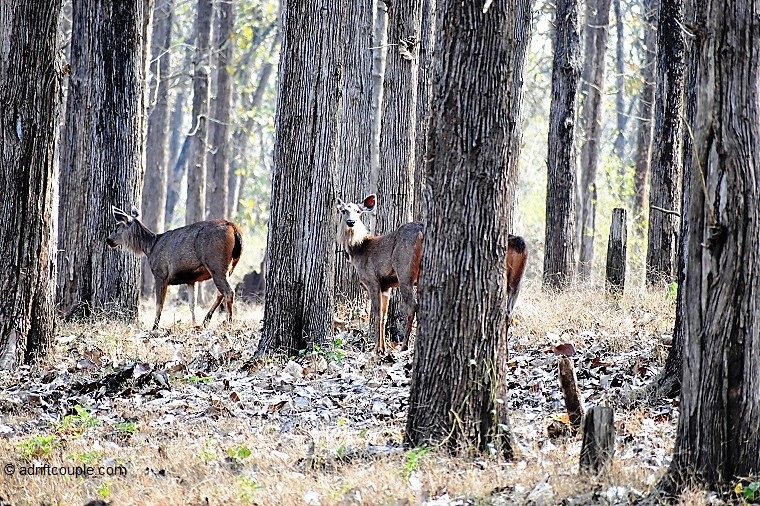 Sambar Deer (Rusa Unicolor) not as common as the spotted ones are on the vulnerable list.

Right of way is always with the animals, the original denizens of the jungle.

The Kabini backwaters with their fertile banks are a favored playground and grazing area for these pachyderms. 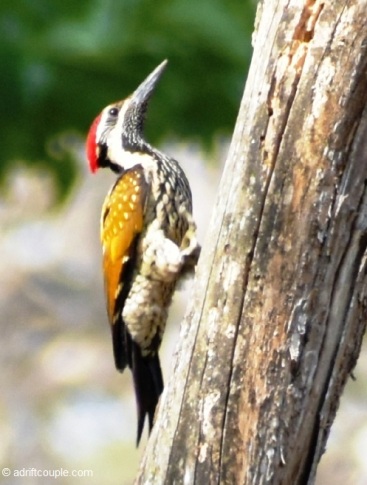 Black-Rumped Flameback also known as The Lesser Golden-Backed Woodpecker.
To the right is the White Crested Kingfisher. 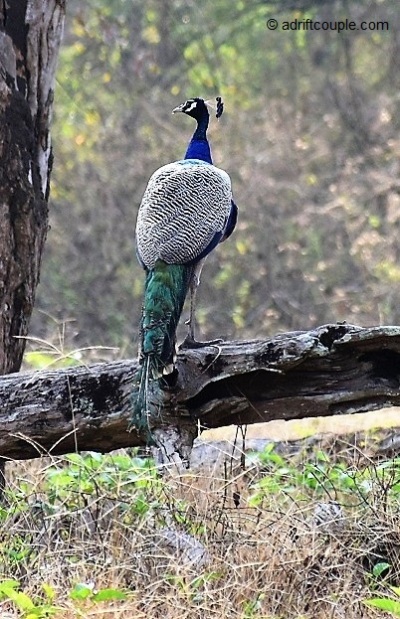 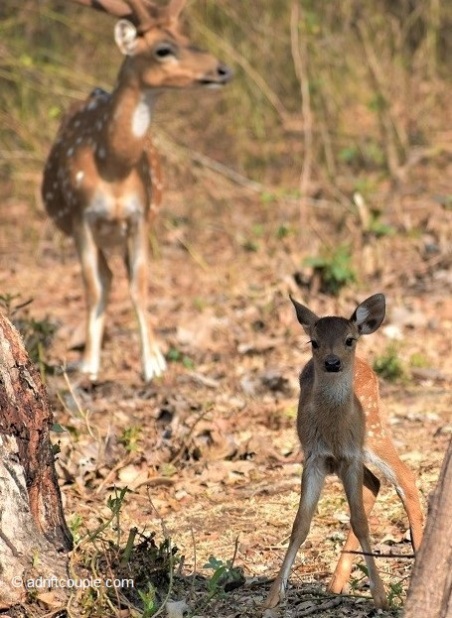 Peacocks perched on trees are always a pretty sight as was this fawn with its wobbly legs looking curiously at us. 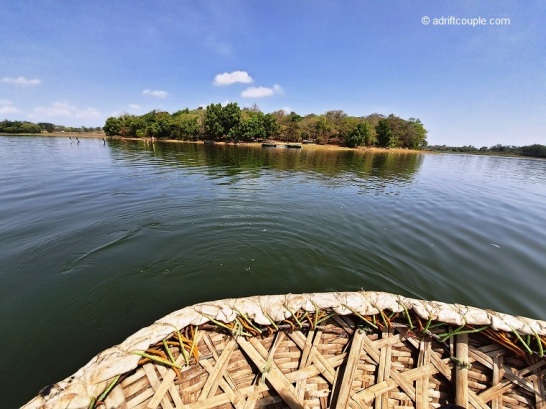 We ended our trip at Nagarhole National Park with a coracle ride in the Kabini river.