TRAVELLING IS ABOUT UNENDING FIRSTS – OURS AT FETHIYE, SAKLIKENT (TURKEY)!

A traveler many a time, while visiting a new destination, tucks away a thought in his mind –  ‘Aah, I would love to return here for an extended stay and explore it at greater leisure’. However, life often doesn’t present a second chance. I wonder when travel will restart in its full glory. Or will lifestyles change after this Covid-19 global pandemic and the tripper’s jaunts ebb for good? Fethiye by the Mediterranean Coast in the Aegean region of South Western Turkey is one such destination I would certainly like to revisit. The thrilling four days we spent there seemed far too less. Well, during these days of lockdown I recollect exciting memories of one of the best tours Ranjana and I enjoyed from Fethiye.

I hadn’t ever imagined that the Saklikent Canyon tour in Turkey would also include a river walk to the Gizlikent Selalesi, a pit stop at Tlos, river tubing and finally a mud bath. Each experience was an adventurous memorable first for us as offbeat travelers.

We took this package with Evergreen Travel Agency, a licenced jeep safari company. The tour leader Erol enriched our excursion with absorbing nuggets of history and culture of the places we visited. He amused us with anecdotes and his unflagging spirit successfully cajoled people to participate in various activities. Without him the day might not have been so much fun.  We have time and again realized that a knowledgeable and genial guide certainly enhances a trip experience immensely!
At the meeting point our group of twenty piled into three landrover jeeps, luckily four wheel drives – the advantage of which we discovered later. We drove for about fifteen minutes through a forest to get a sense of adventure and atmosphere. These tours are conducted both in coaches and jeeps, I highly recommend the latter.

Crossing the forest we hit the road and with the wind blowing in our hair moved on to reach Xanthos Valley and stop at Tlos, an ancient ruined Lycian hilltop citadel. History can be really intriguing. Lycia flourished during the 5th and 4th centuries BC and Tlos was one of its six major cities. Tlos was subsequently inhabited by Romans, Byzantines and eventually Ottoman Turks, making it one of few Lycian cities to be continually inhabited up until the 19th century. Tlos was rediscovered by Charles Fellows in 1838.

A heavy drizzle caught us as we got down at Tlos. Anyway, the time allotted by our guide was too short to go around (perhaps because of the rain), all we could do was take a few photographs from the road. The historical ruins and the thought of a bustling town here from a bygone era seemed fascinating. 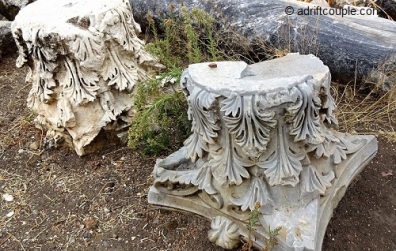 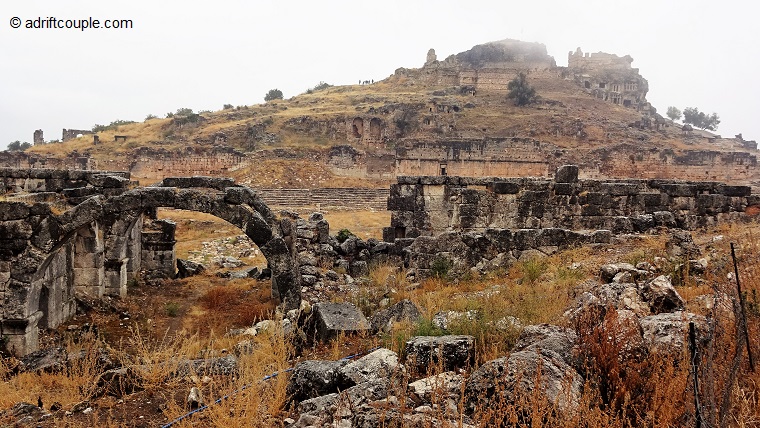 Mental note – Return to Tlos for exploring the Lycian rock tombs, the hilltop fortress, the ruined Roman structures spread around – the amphitheatre, public baths, cisterns, church, agora (market place), granite columns around the area (indicating the presence of a colonnade).

However, we did get to see rock cut tombs at Fethiye – the famed Tomb of Amyntas is a 10 minute walk from the main street. There used to be one house type rock cut tomb with sliding doors for each family. We were amazed to learn that dexterous masons and sculptors supposedly made the tombs manually using hammers and chisels and each took 2-3 years to construct.

We drove through picturesque countryside and since the rain hadn’t stopped Erol first took us to Gizlikent Selalesi, which interestingly translates into ‘Hidden Waterfall’. Here, we were told to leave all our stuff at the restaurant as we would be walking through water. Curious with anticipation at what lay in store, we descended some stairs (a few hundred steps) and then reached a river. There was a lady here hiring out rubber water shoes, a pair for 4 TL.

As we started wading through the shallow waters on the rocky riverbed we realized it had been a good decision to have left our sneakers behind and having opted for these. The rubber shoes were obviously waterproof and hence didn’t get soggy and the holes in the soles made sure that water didn’t collect inside the shoes making walking easier. But perhaps not a very smart idea had been to leave our backpack and cameras behind. We should have carried them in waterproof bags. Hence we don’t have any pictures of the trail except for one of ours right at the end which one of the other hikers took with her cellphone camera (which she was carrying in a ziplock pouch hung around her neck) and was nice enough to e-mail it to us later. 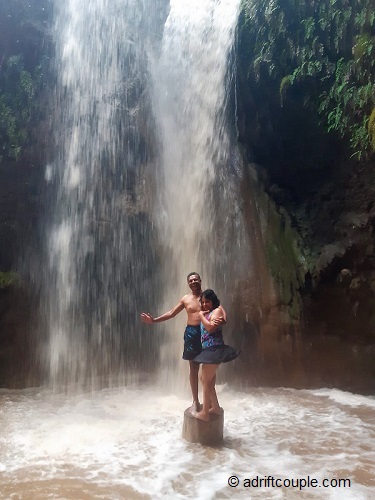 We discovered that it was quite a dauntingly adventurous walk on a rocky trail in calf deep water through a meandering river running across a rainforest. Supposedly 300 meters, the undulating trek seemed almost a km each way. We had earlier forded rivers on foot but never waded through it for such a long stretch with forested cliffs on both sides. The river was about thirty feet wide so each could mark his own trail, clambering over rocks at places and at times the water reaching upto our waists. A feeling of thrill and daring enveloped us throughout the hike as if we were part of a mysterious escapade. As it had rained in the morning, perhaps the water level and current in the river had increased but nevertheless I would peg the level of difficulty as moderate though challenging.

Finally we reached the ‘Hidden Waterfall’ with water cascading down from 100 feet and forming a small shallow and tranquil lagoon at the bottom. The sight was so magical, as if out of the movies. The refreshing shower under the water was just incredibly wondrous.

The walk back seemed easier, I guess, because we knew now what to expect.

From here the famed Saklikent Canyon, the highlight of the day, was just a 10 minute drive. 46 kms from Fethiye, Saklikent as a canyon is the longest one in Turkey and the third longest in Europe. Steep and narrow it is 18 kms long, 300 metres deep and has icy waters flowing through the gorge. It is a sight to behold and if you imagine ancient times 2000 years ago when Romans used to take shelter in the 16 caves along the way you appreciate why it is known as the Hidden Valley.

After traversing 300 metres on the short walkway, much to our disappointment we could venture only a brief distance through the icy waters since permission was denied by the authorities to go any further as a safety precaution after the morning rains. 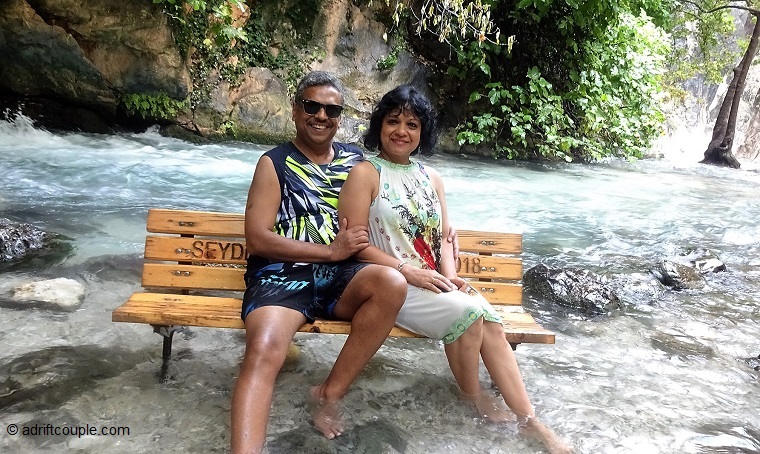 The Saklikent Gorge walk in the river starts from here but disappointingly we couldn’t venture beyond this point. Our smiles are misleading!

Having read so much about this river hike and keenly looking forward to it, with a heavy heart we retraced our steps.

Perhaps our guide Erol had known of this beforehand and that was the reason he ensured we at least undertook the arduous but euphoric Gizlikent hike.

Saklikent is very touristy but the canyon walk is supposedly an overwhelming experience nevertheless, the river flowing through such a high and narrow gorge with the water having sculpted the rocks artistically.

Mental note – Return to Saklikent on a clear day for the enthralling 2 hour, 4 km canyon hike through the river discovering caves and waterfalls. Be prepared to get wet, clamber over rocks, carry swimwear, a simple camera and a waterproof small backpack. Come in the morning to beat the crowds.

After the buffet lunch with some lipsmacking fare of balik (rainbow trout) and tavuk (chicken) which our tour company had arranged at the restaurant we wondered what we would be doing now. We had more than a couple of hours to kill as we hadn’t been able to go on the canyon walk.

Well, there was more on offer with some craziness bundled.  A zip line with three sections, one being over the river. Having been on ziplines many a time in the past we decided instead to try the river tubing. So this is a round tube and the activity a mix between rafting and kayaking! Having done both earlier I was quite looking forward to this though Ranjana was a bit apprehensive as she had never gone solo before. But the huge sport she is, she too strapped on a life jacket, picked up a tube and paddles and joined the rest of us!

Though the water was shallow the 5 km downstream river run turned out to be pretty adventurous. One needs to get a hang of the paddling and get adept fast or else he may end up going around in circles, get stuck in the vegetation near the banks or just be at the mercy of the water current.
A river guide accompanies the group in case someone finds himself in dire straits! With the sun beating down on us we enjoyed both the zesty and the palpable moments as we cruised down the river.

Our jeeps were waiting for us at the end of the stretch and the offroading on the river added to the excitement.

Frolic in a Swamp – Wacky Fun

Ready for the hour long drive back to Fethiye, we were surprised when our Jeep stopped at a nondescript place which just seemed to have a marsh by the fields. Aah, we were going to end the tour with a natural therapeutic mud bath supposed to erase pains, aches and sunburns of the day.

Erol was the first one in and beckoned all of us to follow into the waist-deep muddy swamp. Reluctant at first, then taking the cue from one another finally all members of our group were in there having formed a semi-circle and facing our guide. We followed Erol for the next fifteen minutes in some real ridiculously hilarious moves and loads of priceless fun. I don’t know about the medical therapy but it certainly resulted in a huge bouquet of playful banter and riotous laughs. Ranjana and I had never imagined we would be frolicking in gooey mud like kids and enjoying ourselves to the hilt.

This was just one exhilarating day at Fethiye, a charming town located on the site of the ancient Lycian city of Telmessos. We were staying by the harbor in a delightful sea view room with a private balcony. The evenings were spent strolling along the waterfront and popping into one of the many lively restaurants offering heady cocktails, delectable Mediterranean and Turkish cuisine, with a peppy local band regaling the guests with lilting songs and the balmy sea breeze drifting by.

Though what mesmerized us most was the ancient Tomb of Amntyas built in 350 BC by the Lycians and the ghost village of Kayakoy which had a Greek settlement and is now abandoned. 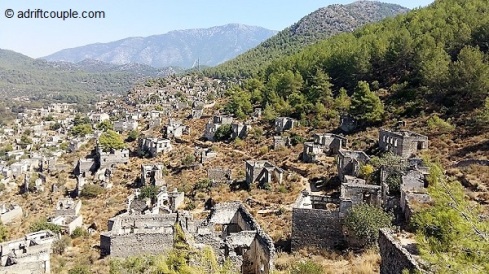 Another exuberant day rolled by with the Blue Lagoon tour from Oludeniz in a Pirate Boat (Gulet) visiting Butterfly Valley and St. Nicholas Island though fleetingly. 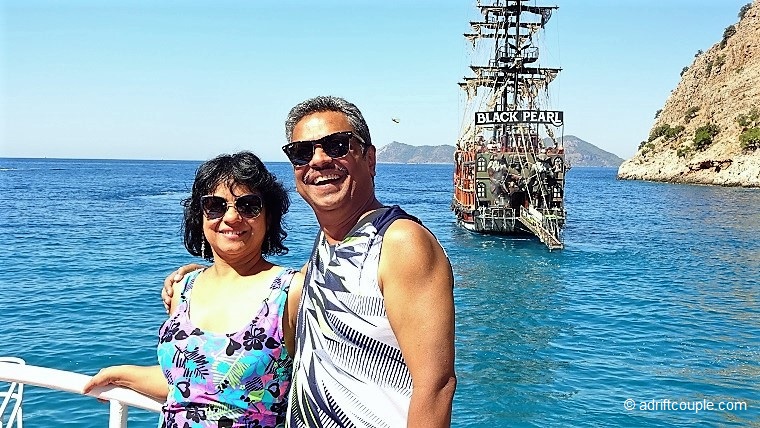 Perhaps on our return we would like to hang out at the vibrant Oludeniz wandering around the surrounding areas and islands without a plan and also enjoy soaring like an eagle over the aquamarine waters in a paraglider. Many a story yet untold, many an experience to unfold!