Jaisalmer – Beyond the Golden Fort, Havelis and Sand Dunes

I was always fascinated by the thought of sighting the Great Indian Bustard; at 10-18 Kg being amongst the heaviest flying birds today, perhaps a bit lighter than its African cousin, the Kori Bustard. It seemed highly improbable as only 600 individuals were existing globally in 2000, the number having dwindled to 300 in 2011. This was November 2014. The best chances of sighting in India are supposedly in the Desert National Park (DNP) of the Thar region. Jaisalmer was unusually hot at this time of the year and we had to actually purchase half sleeve t-shirts as the sun used to really beat down on us during the daytime. Hence, Ranjana was certainly not a wee bit enthusiastic at the idea of wandering around in the scorched landscape in the heat. Our driver, though a local from Jaisalmer, didn’t have any idea of the location or logistics for visiting DNP. So DNP didn’t figure in our itinerary. Hence the desert for us was the touristy Sam Sand Dunes with the ubiquitous camel rides at sunset and the folk program in the evening at the camp.

Camel ride in the dunes at sunset 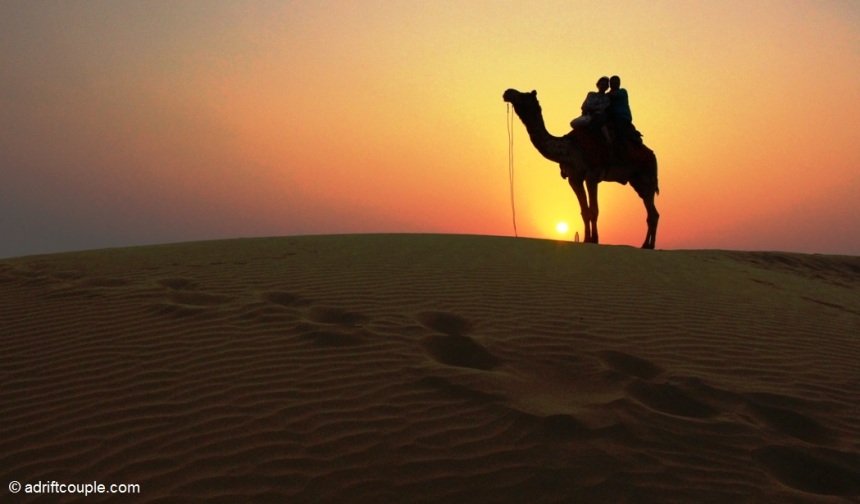 The Sam Sand Dunes at Sunset

As we retired into our tents after dinner, we agreed that we did enjoy the evening, all the more as Ranjana got to share the stage with the local folk artistes for a rendition of Farida Khanum’s ‘Aaj jaane ki zid..’, a diverse genre from their high pitched Rajasthani folk songs.

The next morning we were ready at 8 AM for the drive to our next stop, the grandiose Suryagarh Palace – a luxury we were indulging in at the end of our trip. However, our driver was still blissfully sleeping, not his fault really since we hadn’t made any plans for the morning. But he did freshen up in a quickie and must have gobbled down his breakfast, we were on the road by 8.30 AM. As we left the camp, on an impulse I asked him to turn right instead of left. Questioningly, reluctantly, puzzled he slowly took the right turn.

The whimsical traveler in me had been aroused all of a sudden. He and Ranjana were informed that we were driving down to DNP – half an hour way! I asked him to proceed to Sudasari asking for directions as required.

We reached the place without much difficulty and found a gate with a board reading (in Devanagari script) ‘Desert National Park, Suraksha Chowki, Sudasari’. Not a soul was in sight. 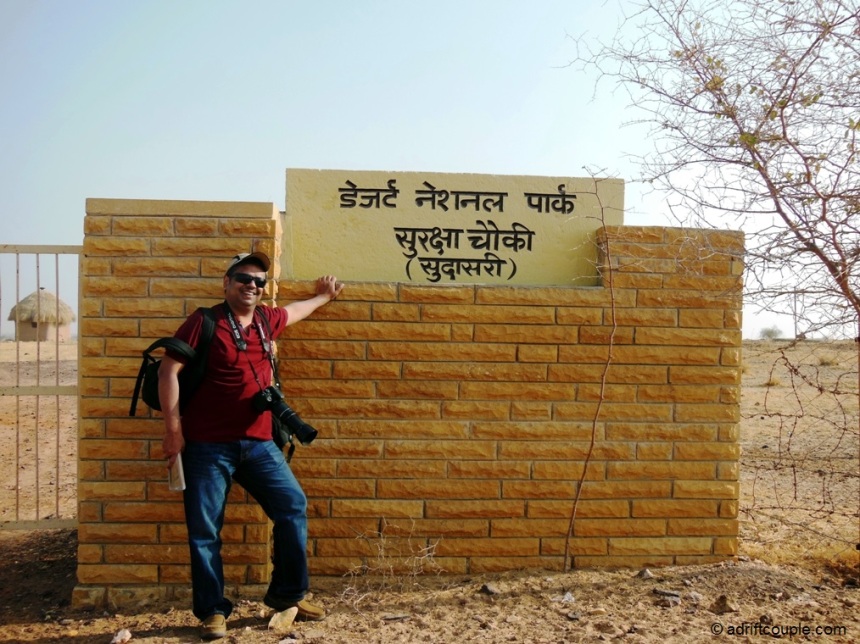 At the entrance of the Desert National Park Jaisalmer

We walked across the road to a couple of thatched huts outside which stood an unhitched, seemingly abandoned cart. Hearing our voices a teenager emerged.  An animated conversation ensued between our driver and him following which we were told that he would take us into the Park on a camel cart and he was authorized by the forest department. Relieved that our unplanned adventure to DNP would not be absolutely fruitless, after a quick negotiation we told him to hurry up as the sun was already high up in the sky. So much so for the recommended best time – sunrise and sunset safaris into wildlife game parks! This camel cart was a far cry from the canopied one (almost royal) in which we had taken a ride in Pushkar. But I wasn’t complaining and Ranjana also managed to settle in once she was hoisted up.

Khan, our young, amiable guide answered our questions happily as the camel cart trundled along on the dusty track with its clumps of sewan grass and ker trees. 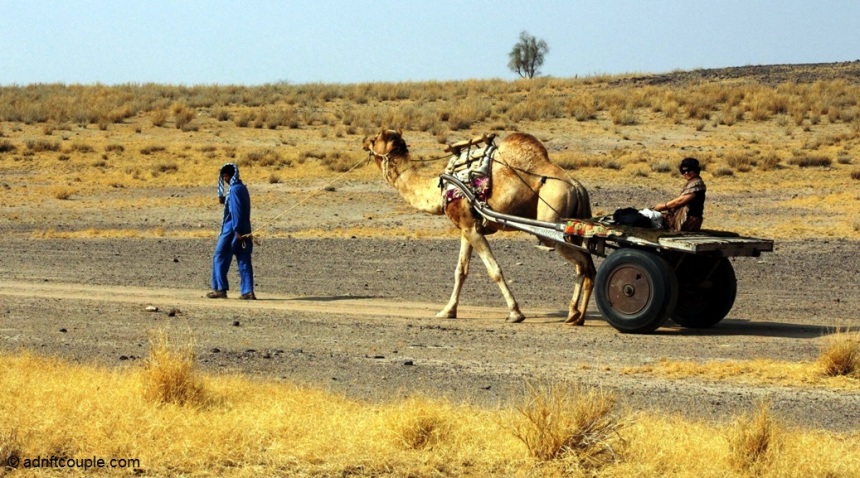 Camel cart safari in search of the Great Indian Bustard

Then we had our first exciting sightings – A Red Headed Vulture (also known as King Vulture), an Indian Vulture and a Tawny Eagle atop Ker Trees.

I was surprised to learn later that both the scavenger vultures we encountered figure in the critically endangered list; in fact four of the nine species of vultures found in India are critically endangered, one is endangered and one near threatened according to IUCN. Their numbers over a period of time have depleted as a result of diclofenac and pesticide poisoning and destruction of their natural habitats due to urban development projects.

As an aside, the mythological bird Jatayu in the Ramayana was a demi-god in the form of a vulture. Chadayamangalam, 50 km from Thiruvananthapuram, Kerala is the place where Jatayu is said to have fallen from the sky while battling Ravana. Here, at Jatayu Earth’s Center, recently the largest bird sculpture in the entire world has been built. At a height of 70 feet, breadth 150 feet and length 200 feet the divine Jatayu Vulture King atop a hill is a sight to behold.

Ker Sangri – The Berries and Beans

Getting back to the present, the raptor and scavenger at DNP were perched atop a Ker, many of which interspersed the Park – a tree with green thorny stems and almost obscure leaves.

Having savored the tangy ker-sangri dish, earlier in Jaisalmer, more than once and now with a fine taste for it we were elated to spot the Ker Tree, the genesis of the piquant rustic fare. My first sampling of the dish however dates back to 1995 during a visit to the Shekhawati Region with its al fresco art galleries and the enchanting painted havelis of yesteryear merchants. 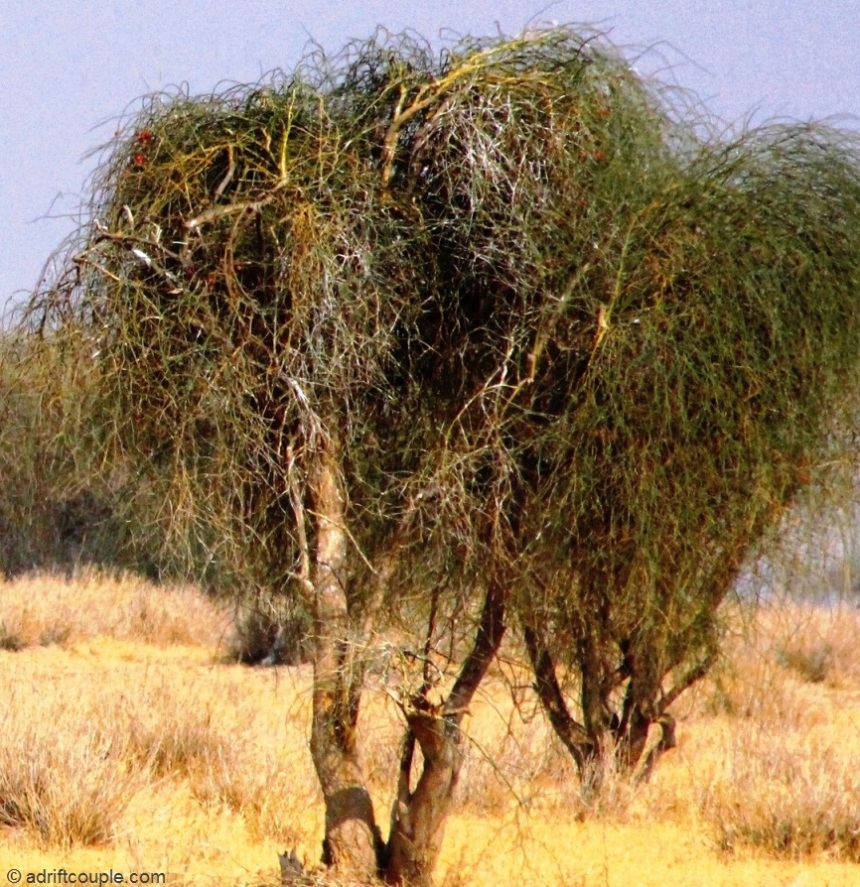 The Ker tree with red berries

Ker, a shrub berry and Sangri, a bean of Khejri (not to be mistaken for Sangria!) are wonderfully paired for this earthy preparation in the arid land of Rajasthan. The resultant Ker Sangri dish is a vibrant gourmet mix of spicy and zesty flavours. The sourness of the Ker berries is moderated by soaking in brine when unripe. Raw sangri beans are picked off the trees, parboiled and dried.

The Ker tree has religious, medicinal, economical, ecological significance and provides rural subsistence. Khejri is the state tree of Rajasthan. It is said that in as far back as 1730 AD, Amrita Devi of Khejarli village and her three young daughters sacrificed their lives to shield the venerated Khejri trees which were to be felled under the instructions of the king of Marwar.

While these folklores resonated in our minds imagining the archaic, macabre acts taking place, Khan led our camel onwards as we looked around at the parched desert trying to spot the elusive Great Indian Bustard, yet another critically endangered species. We were the only people in this bleak, barren terrain earlier having been populated with salt lakes, now the only evidence being the dried up beds.

After a while our adolescent birding scout asked us to get off the cart, pointing by the side of the track, to a cramped straw shelter looking out to a small waterhole, fed by piped water, shaded by a ker tree. The copious droppings of deer – blackbuck or chinkara – ramped up our hopes of sighting these animals at close quarters.

Waterhole near the viewing point

The half an hour we spent there seemed adventurous but might have been more exciting had we not been in the harsh, inhospitable desert at solar noon. All we spotted through the straw peephole were a few common birds – a white eared bulbul and a couple of desert wheatears. 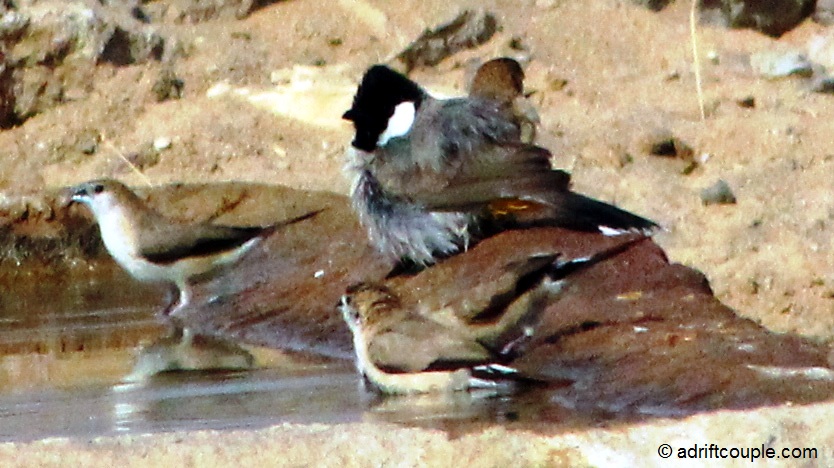 Back on the cart, with the bright fiery ball at its zenith blazing down on us, scanning the brown, sandy topography, five minutes on the trail Khan whispered excitedly and pointed to our left cajoling the camel to a quiet halt. There we spotted the Godawan – The Great India Bustard (GIB) – the state bird of Rajasthan, endemic to India. A thrill ran down our spines at the sight of the 4 feet high large avian with its horizontal body and long bare legs striding away into the scrubland. It was unmistakably identifiable by its black crown on the forehead contrasting with the white neck and brownish body.

For the next 10 minutes we rapturously enjoyed the sight of the rare terrestrial bird which can weigh upto 18 kg. Its low numbers, amounting to about 15 birds in Rajasthan, is attributed to the fact that it lays only one to three eggs at a time and if the eggs or hatchlings are saved from the predation of foxes and eagles, they are in danger of diminution due to human-wildlife conflict – hunting, poaching, declining grasslands, energy and irrigation projects. As recent as end 2017 one GIB crashed against a power transmission line and was electrocuted.

Though largely land birds they can fly up to a height of 250-300 feet. Once common on the dry plains of the Indian subcontinent, now less than 150 individuals are estimated to survive, though I couldn’t find definitive figures of a recent census.

Till 1980s, about 1000 Great Indian Bustards existed in India, spread across eleven states. In July 2011, the bird was categorised as “critically endangered” by the International Union for Conservation of Nature (IUCN). The Ministry of Environment, Forest and Climate Change estimated the total population of Great Indian Bustard in the country to be 296 spanning five Indian states – Rajasthan, Gujarat, Madhya Pradesh, Karnataka and Andhra Pradesh – in a report published on 13-December-2011.

Now, having got us to sight the GIB, our nature aficionado was all set to turn back. However, we persuaded him to take us further. Our enthusiasm paid off – we sighted a Chinkara, the Indian Gazelle another state animal of Rajasthan besides the camel. We rounded off our field trip after viewing some Blue Bulls – the Nilgai. 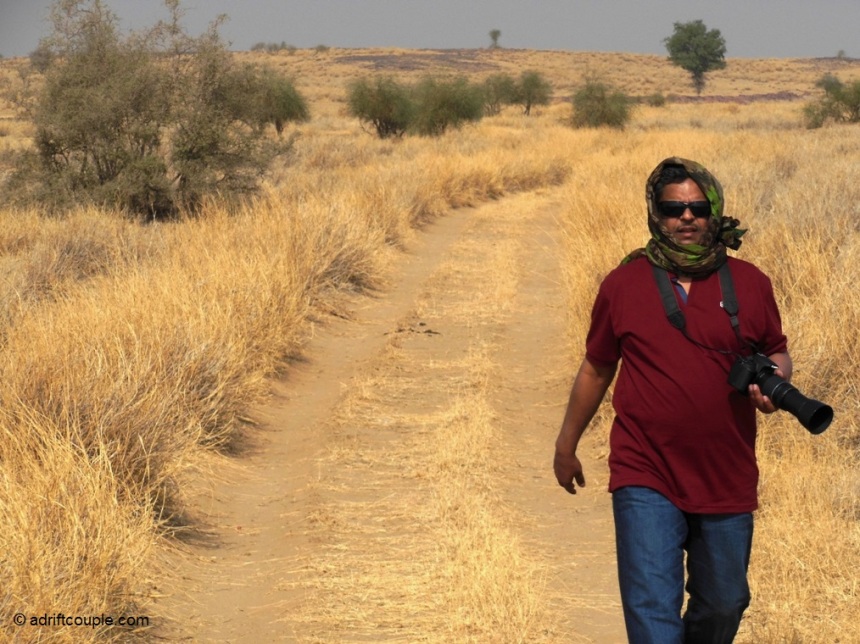 In Search Of The Desert Fox

After I had tipped Khan generously he offered to take us further on the road outside the park where he assured us that we would be able to sight the desert fox. The forest office was open by then and we went in to pay the park entry fees and meet the official for possibly more information on DNP and the area around. She, in her misplaced goodness, discouraged us to go with Khan apprehensive that he might be just taking us for a ride.

But for the ‘ride’ we did go. Enjoyed it, driving in the desolate region far from in-habitation. Though we didn’t meet any fox we saw a pair of cream coloured coursers, elegant in their gait and another sight I always find so fascinating, a flock of sheep congregated under a tree, their white coats a stark contrast to the sandy, dust colored turf.

Opulence In The Desert

Ambitious plans were made to return the next morning at 6 AM but to Ranjana’s relief our driver took the night off and we overslept. What else could be expected after being joyfully immersed in the annals of history during an in-house cultural dance-drama performance followed by dinner under the stars in candlelight at the regal Suryagarh Palace – a delightful gastronomic spread with a wide range of delectable dishes. 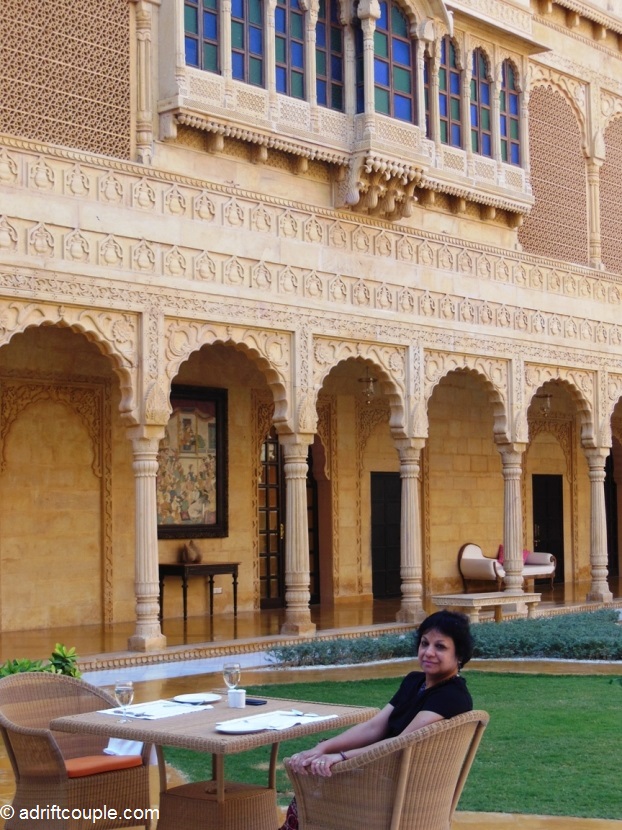 The impetuous excursion to the Desert National Park had been an enriching experience but with an underlying pathos – sighting critically endangered birds and the depleting population of ker and khejri trees and seeing firsthand how biodiversity was at stake due to wildlife/nature-human conflict.