While deciding on the destinations for our two week road trip in Sri Lanka (charmingly known as the Pearl of the Indian Ocean) we were spoilt for choices.  What a diverse mix on offer! 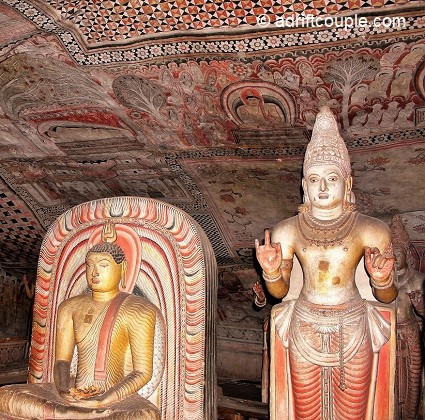 Being inside the Dambulla Cave Temples (more than 2000 years old) is a surreal experience. There are five small caves or rock overhangs, on a hilltop, with numerous statues of The Buddha in various forms and postures.

Having eclectic interests, we started from Colombo – the Independence Square and the Gangaramaya Temple of mixed Asian culture (Buddhist, Sri Lankan, Indian, Chinese and Thai) to Dambulla and its 2000 year old temples housed in ancient caves with multiple statues of the Buddha to the 5th century AD Sigiriya Lion Rock Fortress atop an ancient plateau said to have formed from the magma of an extinct  volcano.

Passing through Kandy we took a break at Nuwara Eliya, which perhaps could have been given a pass, finding the actual experience a bit staid and a tourist trap as compared to the over hyped descriptions in travel blogs or perhaps because we had earlier visited such topography in our home country, India. 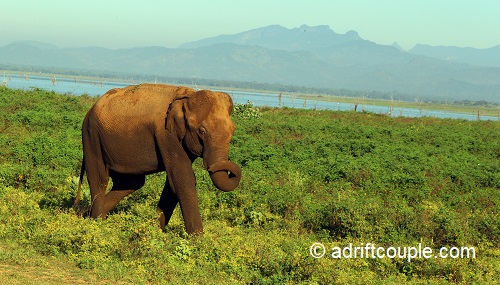 Jumbo – majestically ambling along the river in Udawalawe.

We enjoy rougher country so were really looking forward to our tryst with wildlife. We decided to visit the less crowded Udawalawe (a National Park near Colombo, 160 kms south-east), best known for its large population of Asian Elephants and it certainly did not disappoint. We encountered them in herds in all sizes, were enamoured by baby elephants and overawed by a lone bull in musth, blessed that he was walking away from our jeep. 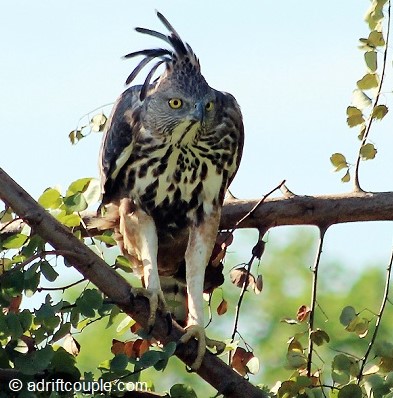 Our most thrilling bird sighting – a Crested Hawk Eagle. Not shy, the striking raptor gifted us with a relaxed audience.

The Park provided us with a guide. Laxman was knowledgeable and humorous making our safari more than just entertaining. He filled us in with many interesting details like that in Asia only 6% of male elephants have tusks, older elephants have curly ears, females have a flat back while the males have curved, angular backs.

Our rendezvous with the pachyderms was followed by a visit to Bundala International Ramsar Wetland,  where we chanced upon around 30 of the 197 species of birds said to habitat the wetland – mostly endemic as largely the migratory charmers had not yet arrived. 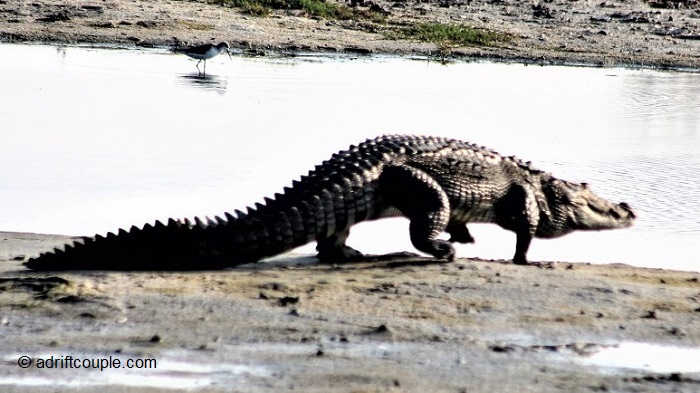 A dauntingly enthralling experience at Bundala was to be able to observe at close quarters estuarian crocodiles and fresh water muggers. 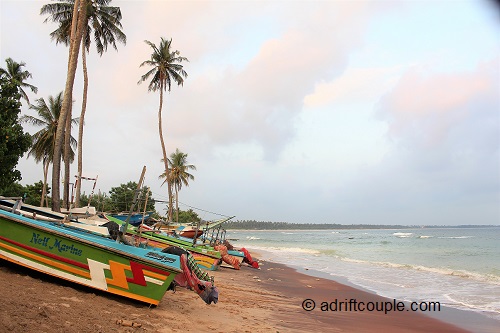 Surround sound serenity: At the Rekawa Beach, as the men go about their chores preparing for the night fishing excursion, the sun about to dip in the Indian Ocean painting the sky in pastel hues!

However our last three stops were equally if not more enchanting. The quaint fishing village of Rekawa, our resort overlooking the Indian Ocean, where we had taken a night stop to perhaps meet sea turtles come to the beach to lay eggs, the surfing town of Mirissa for an early morning boat safari for whale and dolphin watching and at Bentota where the highlight for us was canoeing through mangroves and the morning jogs at the long stretch of the private beach in front of our resort. 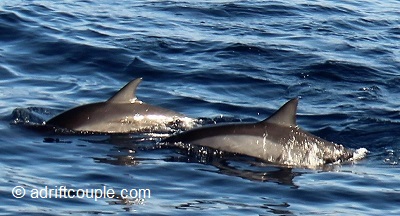 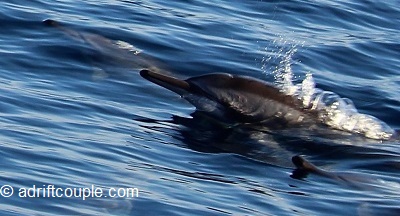 As the sun rose in the sky at the Mirissa Harbour we were gifted with a clear atmosphere. Our boat was cruising at a leisurely 08 knots when the comfortable naked eye visibility of 02 nautical miles was mesmerizingly interrupted by a huge pod of spinner dolphins, about 150 of them, which appeared as if from nowhere, the vast blue ocean a playground for these whimsically impetuous creatures. The spinners came drifting over, sleek and dainty, showcasing all possible skills – from a dolphin spinning on its axis, a pair mating, some cavorting in and out of water, in pairs and in upto groups of ten; free beings in their infinity pool. The fifteen minute performance was one of the best we have ever witnessed.

However, during the four hour boat trip the high adrenalin rush surged when the shout and clap for whales went up – “Whale 3 O’Clock” and the boat would try to speed towards it while everyone lounging, frenziedly scrambled up to get a better look and their Nat-Geo shots during the few seconds it was on the surface to take in air. We were rewarded with quite a few sightings of blue whales (largest animal on Earth), also with them spouting water, though we missed the classic whale dive with its tail flourished in the air.

As our boat moved back towards the harbor a last shout went up and we were presented by an amusing treat – two green turtles mating, one’s head bobbing in and out of the water and flippers flapping furiously! 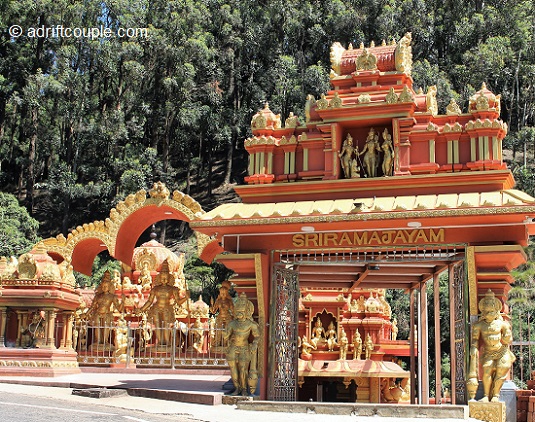 Seetha Amman Temple – This place is believed to be the site where Sita was held captive by king Ravana.

Seafood, colonial town of Galle, ‘darshan’ at two temples dedicated to Sita from the Ramayana, our photo op with the unique Sri Lankan stilt fishermen (a dying tradition which is said to have originated around WW II), our tryst with sea turtles at Fernando’s conservatory and a splurge on Sri Lankan jewelry are some other memories etched in our minds as part of a fascinating Sri Lankan trip. 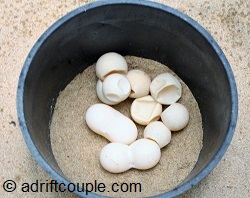 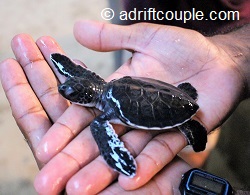 Disappointed at Rekawa, having missed out on meeting any visiting ‘Mama Turtles’ from the sea, the lurking interest and intrigue stayed with us. From Bentota we ended up visiting Amarasena Fernando’s Turtle Hatchery at Kosgoda, now largely managed by his son, Santha. Amarasena is supposed to be one of the pioneers in turtle conservation in Sri Lanka, having built his first hatchery in 1966.  Santha took us on an exhaustive tour of his facility and  showed us there four out of the five species of sea turtles found in Sri Lanka. We were also thrilled to witness the turtles in various stages of their lifecycle – right from eggs to hatchlings to full grown adults and also had the pleasure of holding some of them up close! 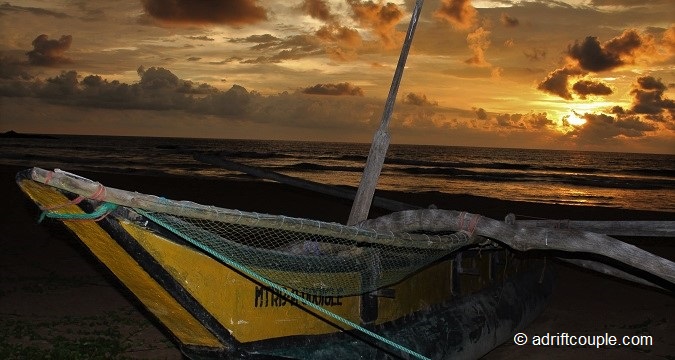 The celestial fireball slips into the Indian Ocean, the sky a fiery blaze in orange, the village fisherman’s boat set with its nets to venture into the sea. A day ends for some and a day starts for others, poetry for some, mundane for others!